Who's tools are they? - a review of the book "the Molecular Gaze" and question. 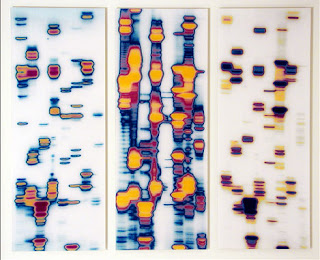 Here are some artists referenced in the book "The Molecular Gaze; Art in the Genetic Age" - by Suzanne Anker & Dorthey Nelkins.  Both fine artists in their own right who address science and art in their own work as well, and write a  fantastic books about Biological / genetic issues represented in current art work being produced in the community.
They address  different factions of approach to the issue:
1)   “Reductionism”
Can you break the body down to a code?  Are we just little blue prints for the next building of life and does the Cartesian model apply to a whole being?    On Page 19 they refer to it as:
“Reducing life itself o molecules, it has displaced he visceral reference that had once defined the authenticity of the body and the authority of traditional biology as a descriptive science.”
What I love about their writing is they always show this it is / it isn’t in their research.  In this chapter, what they are looking at is - Where it is our DNA that makes us an individual, it is also the format of this individuality that makes us not only the same, and illustrates how very little separates us, it’ is also manipulate able… malleable…   A pliable state of being, that is not only so easily altered, but also perhaps, even synthetically created.
2)   “Mutation, Manipulation, and Monsters; the New grotesque in art”

"Cronus Devouring His Chrildren"   (1824)
Francisco de Goya "
This reminds me of Goya’s images of war, to show the worst of what is out there, to describe the truth.  If we have the ability to manipulate, who’s to say we will do it right, ethically, correctly – or will we improve ourselves by combining and recreating ourselves in a new artificially selected / manipulated evolution of sorts?????
Obviously images from Jake and Dinos Chapman , my shero ‘Cornelia Hesse Honegger, Hans Bellmer, Hanna Hoch, Charles Ray and more… 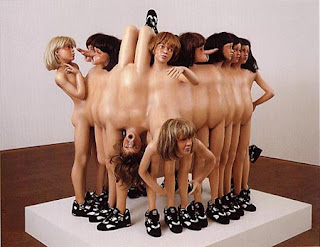 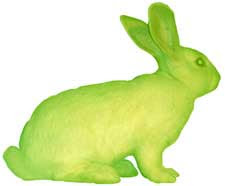 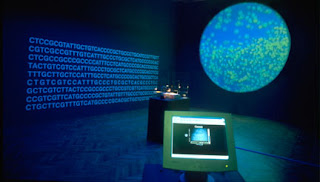 1)  Eduardo Kack:  "Alba"
2) Eduard Kac: "Genesis".  -->  coming from the biblical phrase
“Let man have dominion over the fish of the sea, and over the fowl of the air, and over every living thing that moves upon the earth.”
Image taken from the article by Roberto Simanowksi's (JUST AMAZING AND HIGHLY RECOMMENDED)
The Body in Cyberspace: Invented, Morphed, Generated, Dismissed
Much about the same above, but the more optimistic / improving the world version, and much more about artists and scientists who ACTUALLY manipulate life into new monstrosities, (Eduardo Kac and the “Tissue Culture and Art Project” (Oron Catts, Ionat Zurr, and Guy Ben-Ary.), an Australian collective who use actual cells (Pig cells in this example) – to sculpt objects. 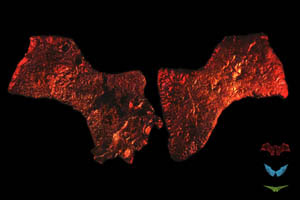 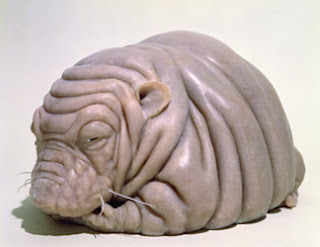 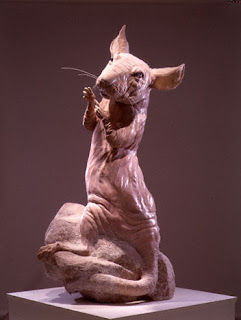 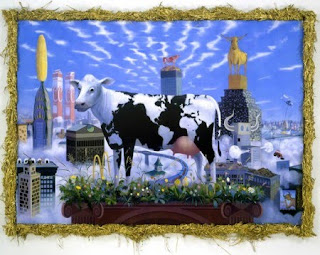 Frank Moore
Image taken from his own site: http://www.speronewestwater.com/cgibin/iowa/artists/record.html?record=13 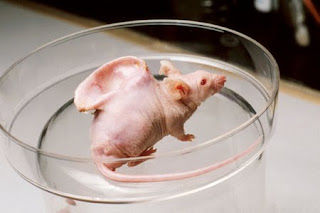 It's a hard chapter to read as a fan of science because it truly expresses the great  bconscious societal concerns about new discoveries in science and how it is applied to our daily world.  The realization how mutable the body is, our genes, our sense of self and what that is – is this causing an anxious identity crisis or a desire to deem one’s self their own and untouchable – needing to defend ourselves from outside forces. Are images there to help describe and translate our reality, or persuade the audience to seeing the world our way?  When a scientist discovers a new tool, do they have a responsibility to see its use ethically handled?  Or does the artist, when tackling the subjects of genetic insecurities; are they well versed enough in the subject to be discussing it in the public arena without aiming towards impulse and panic?
So – the question to them is:
“When the artist uses the tools of science – adopting the research methods as their artistic practice, do they perpetuate the frenzy by actualizing the fears they wish to have society consider and avoid?
Specifically, I am thinking of the work of
Tissue Culture and Art Project Collective and Eduardo Kac.
In their case, does the actualizing of a spectacle prove their point or lessen it? 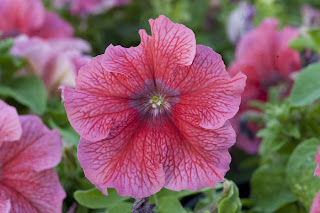 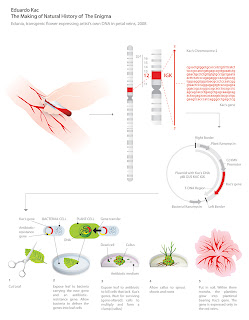 the Making of Eduina.  the image is taken from the attached link (click)

Hybrids of Art and Science

Followers (friends) of Hybrids of Art and Science

Sources for Materials for those working in the arts and sciences

Events, talks about art and science

Abbi
Minneapolis, MN, United States
I like science, Music,and Art & Living is fantastic and aren't we lucky to be here!